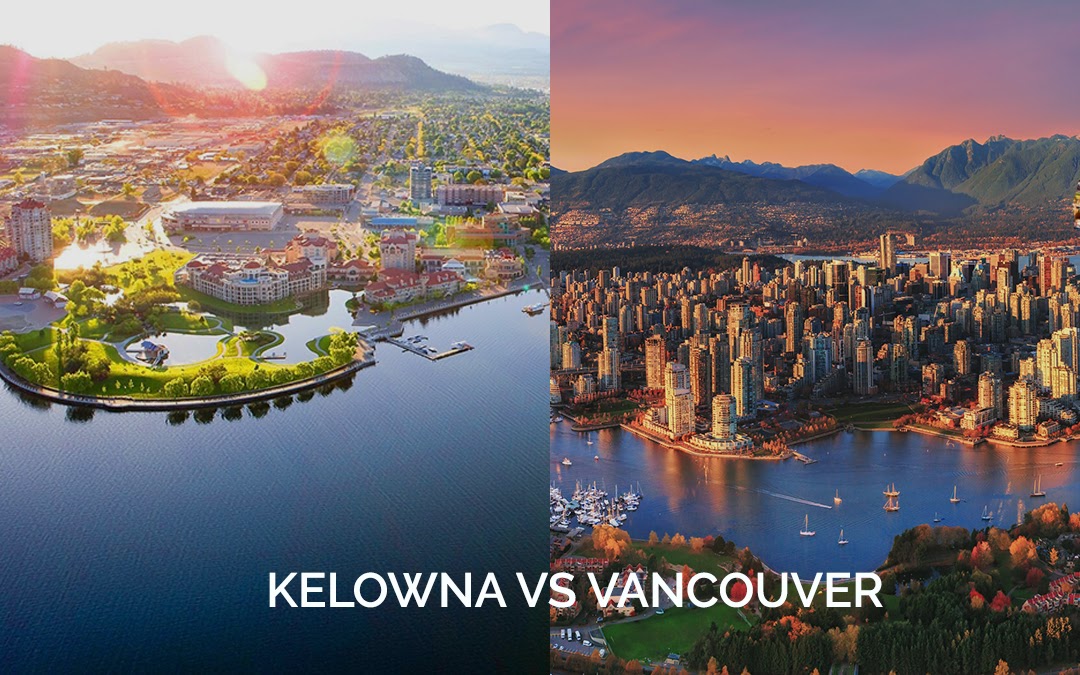 Why Should You Choose Kelowna Over Vancouver?

Kelowna over Vancouver? You might most probably be thinking about it. The City of Vancouver and the City of Kelowna are the two biggest hotspots in Canada. If you are moving to or visiting Canada, these two could be your topmost options considering the weather, landscapes, employment opportunities and all the adventures each city offers. However, if you are picky enough, you might detect some perks of living in Kelowna, as we already did and you might agree on what is mentioned below.

Vancouver Costs You A Lot

Being the second least affordable place in the world, living in Vancouver could always be more expensive than living anywhere. On the other hand, Kelowna too is known as the sixth most expensive city in Canada. Therefore, you have to be careful when selecting Kelowna over Vancouver. It is pretty much agreed that living in Kelowna tempts you to afford a car which can be a bit expensive once added to the rent. Even so, a house in Kelowna is known as a good investment as the city is growing and the housing prices too.

A Mid-Sized City That Never Disappoints You

On the basis of population, one might think Kelowna and Vancouver are not comparable at all. Therefore, one might think that they should not be thinking Kelowna over Vancouver. By the year 2017, each city held over 132,000 and 675,000 population, respectively. However, in Canada, you might not find that many big cities like Vancouver. In fact, it is the biggest city in British Columbia. Kelowna too, is among the big cities of Canada and the biggest in Okanagan Valley. Nevertheless, despite being the biggest city, Vancouver has less than one million population within the city limits and that brings both cities closer enough to compare.

Kelowna holds both big city and small countrysides altogether in an hour’s drive apart. When you compare Kelowna over Vancouver, It does not feel like a country town despite the small population and most people find it nice to live in as well.

For someone looking for the city feels, with not many people hanging around, Kelowna over Vancouver would be the ideal place. A mid-sized city like Kelowna is never congested during your evening walks. With a great downtown, bars and restaurants, it will never disappoint you from missing out on any perks of living in a city.

Just beyond the outskirts, you can find lots of hikes and mountains with beautiful lakes scattered around. While Vancouver remains as a traditional city, Kelowna will provoke your thoughts with everything you need and a good variety.

Tourism In The Comparison Of Kelowna Over Vancouver

In 2019, Vancouver could welcome over 11 million overnight visitors earning over $14 billion and $38 million tax contributions with over 104,000 full-time equivalent jobs. However, not everyone prefers having that many tourists around. The increased traffic and having people frequently stopping by can disturb the calmness in the neighborhood.

On the other hand, the tourism industry brings a lot of jobs to Kelowna as well. Kelowna is full of vineyards and orchards and things to see including a Big White Ski Resort. You may visit Canada to work on a holiday visa, or looking for work. Staying in Kelowna over Vancouver will let you try farming jobs and many employment opportunities in winemaking agriculture.

If You Prefer Lake Vibes

Both cities will present you with their own encounters if water makes you decide where to locate yourself. Kelowna has lots of lakes all around it and Vancouver is on the edge of the Pacific Ocean.

There are a lot of fun recreational things you can do both in the ocean and in the lakes but it is really a personal preference. Lake culture is going to be more boating and water skiing, whereas, the sea culture gives you more swimming and sunbathing, in addition to the above.

You might find either salty ocean or warmer freshwater lakes interesting. Both cities can be declared as very outdoorsy cities with hikes within both of them and more mountains too.

All Four Seasons At Its Best

Jogging at the seaside is irresistible in the mild summers of Vancouver. However, you might not prefer the outdoors in the summer afternoons of Kelowna. It gets very hotter in summer in Kelowna than in Vancouver, which offers you mild weather throughout the year, including the winters of course. However, the winters in Vancouver are very gloomy and grey that might trap you in a gloomy mood, while in Kelowna, you get more like a snowier, colder winter wonderland with more sunshine. Kelowna would be ideal if you want to grasp all four seasons of Canada in the most glorious way.

The higher number of job opportunities is also an added advantage to Kelowna that came with the airport. You will not have to drive all the way to Vancouver and stay on the road for another five to six hours to reach Kelowna. It is just a one-hour flight.

Breathtaking Views of Kelowna Over Vancouver

Both cities possess a ton of beauty. With a number of orchards scattered around, Kelowna gives you fresh fruits businesses and wineries and a great little city to call home. People from all over the world visit Vancouver to witness its beauty.

Kelowna too, holds its own unique beauty with hotter summers. Kelowna is only five and a half to six hours apart from Vancouver which is not too far away to check on. If you are in Kelowna and want to experience Vancouver, it is always an attainable option. Being in Kelowna will never keep you off from exploring the neighbourhood.

If you are looking to move to Kelowna from Vancouver, hire a reliable moving company with an affordable moving package for Okanagan Valley. At Aris Moving, since we offer free moving boxes, you will now be able to pack and arrange everything in advance. Kelowna over  Vancouver is a very considerable option. You are never away from the city and downtown. Being a growing city, Kelowna is a good place to invest at the moment. There is always an opportunity to live in a bigger space at an affordable price.